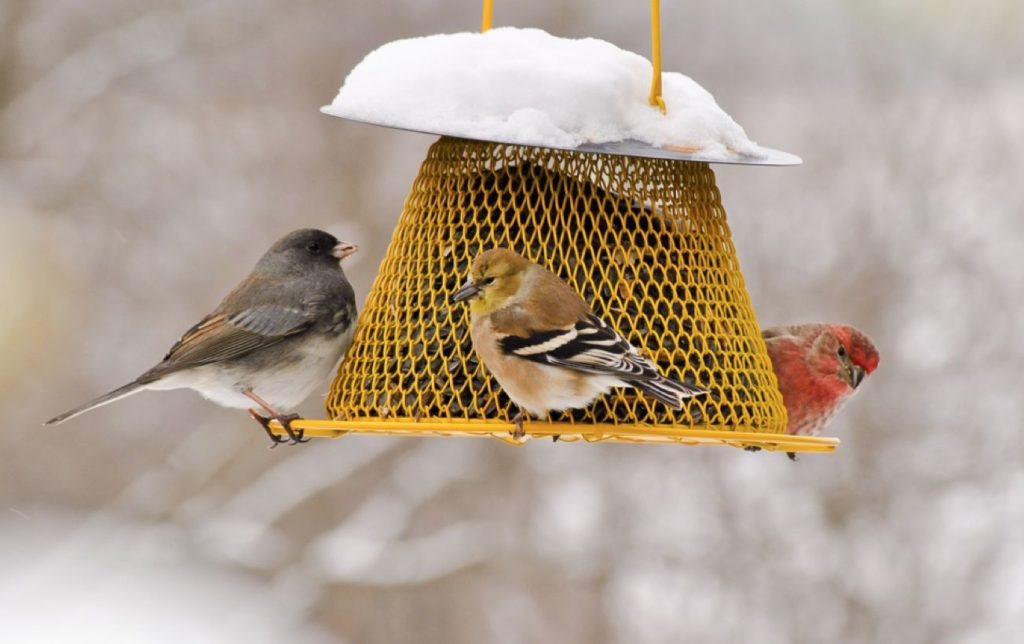 People in many parts of the world feed birds in their backyards, often due to a desire to help wildlife or to connect with nature. In the United States alone, over 57 million households feed backyard birds, spending over $4 billion annually on bird food. While researchers know that bird feeding can influence nature, they do not know how it influences the people who feed those birds.

“Given that so many people are so invested in attracting birds to their backyard, we were interested in what natural changes they observe at their feeders beyond simply more birds. In particular, we wanted to know how they respond to their observations. For example, how do they feel if they see sick birds at their feeders, and what actions do they take to address these observations?” said Ashley Dayer, an assistant professor in the Department of Fish and Wildlife Conservation in the College of Natural Resources and Environment at Virginia Tech.

Researchers Ashley Dayer and Dana Hawley of Virginia Tech recently published their findings in People and Nature, a new journal published by the British Ecological Society.

The study was conducted in collaboration with researchers from the Cornell Lab of Ornithology and Asst. Prof. Richard Hall of the Odum School of Ecology and Department of Infectious Diseases at the University of Georgia.

The researchers analyzed how people who feed birds notice and respond to natural events at their feeders by collaborating with Project FeederWatch, a program managed by the Cornell Lab of Ornithology that engages more than 25,000 people to observe and collect data on their backyard birds.

Using a survey of 1176 people who feed birds and record their observations of birds in the Project FeederWatch database, the researchers found that most people noticed natural changes in their backyards that could be due to feeding, including an increase in the number of birds at their feeders, a cat or hawk near their feeders, or a sick bird at their feeders.

“More and more, we see that humans are interacting less with nature and that more of our wildlife are being restricted to areas where there are humans around. Looking at how humans react to and manage wildlife in their own backyards is very important for the future of wildlife conservation and for understanding human well-being as the opportunities for people to interact with wildlife become more restricted to backyard settings,” said Hawley, an associate professor in the Department of Biological Sciences in the College of Science. Hawley’s research program at Virginia Tech focuses on wildlife disease ecology and evolution.

“From my 17 years working with people who feed birds as part of citizen science projects, I’ve heard a great deal about their impactful observations at their feeders. This study provides important information about the breadth and pattern of these experiences through responses of over 1000 participants. The findings will help us at Project Feederwatch improve how we work with bird watchers toward our shared goal of bird conservation,” said co-author David Bonter, Director of Citizen Science at the Cornell Lab of Ornithology.

The people who feed birds also responded, particularly to cats at their feeders, by scaring off the cats, moving feeders, or providing shelter for birds.  When observing sick birds, most people cleaned their feeders. When observing more birds, people often responded by providing more food.  Fewer people acted in response to seeing hawks; the most common response to this was providing shelter for the feeder birds. These human responses were, in some cases, tied to peoples’ emotions about their observations, particularly anger. While cats near feeders most commonly evoked anger, sick birds led to sadness or worry. Emotions in response to hawks were more varied.

“Feeding wild birds is a deceptively commonplace activity. Yet, it is one of the most intimate, private, and potentially profound forms of human interaction with nature. This perceptive study uncovers some of the remarkable depth associated with bird feeding and discerns that people who feed birds are alert to a wide range of additional natural phenomena,” said Darryl Jones, a Professor at the Environmental Futures Research Institute and School of Environment and Sciences at Griffith University in Australia, who was not connected to the study.

One surprising result that the researchers found in this study was that when deciding how much to feed birds, people prioritized natural factors such as cold weather more than time and money. Most people believed that the effects of their feeding on wild birds was primarily good for birds, even though many observed and took action in response to natural events in their backyard that could impact the health of the birds and might partly result from their feeding.

“For many people, feeding birds is the spark that ignites a stronger sense of connection to nature, and can lead to benefits for wildlife conservation and human wellbeing,” said coauthor Richard Hall, an assistant professor in Ecology and Infectious Diseases at the University of Georgia, who also serves on the board of the Oconee Rivers Audubon Society.  “A growing body of research shows how providing food and habitat for backyard birds influences their breeding success, survival, movement and even their evolution. This study points to willingness among people who feed birds to change their feeding practices in response to undesirable outcomes such as disease outbreaks, and highlights the importance of adopting responsible feeding practices, such as cleaning feeders and providing nutritionally appropriate food, that maximize benefits and minimize risks,” he said.

“Overall, our results suggest that people who feed birds observe aspects of nature and respond in ways that may affect outcomes of feeding on wild birds. More work is needed to fully understand the positive and negative effects of feeding on wild birds and, thereby, the people who feed them,” said Dayer, whose research focuses on the human dimensions of wildlife conservation, applying social science to understand human behavior related to wildlife.